I've come to look forward to this event each year. It helps to set me straight and remind me why I do any of this, for the fun of it. This is the seventh year for the race and I've had a blast at every one of them.

The event is aptly named, because I'm not really sure it's a race; it is however a challenge. To get to the finish line you need to cover about 4.5 miles on foot and about 2.5 in a kayak. Each year, since the event's inception in 2010, has seen different conditions that have helped to shape the challenge beyond covering the required distances. Weather conditions, river levels and even a local tragedy have come into play as each mid-August has rolled around.


Personally each race has been different, because most every year I've had at least one family member participate with me. The Chiques Challenge conveniently falls on the same day as Janice's family reunion, so most years it's been easy to conscript relatives to go along with the fun.


One year we had five of us and only one year did I do it alone. This year I would be running and paddling solo for a second time.

The humidity at last year's challenge was no joke, Janice's Sister Debbie and I did it together and I'm sure she'd attest to the fact that the heat and humidity had you sweating while standing still. This year it was only about 80° and the Pennsylvania August humidity was there, but somewhat bearable. Janice went with me and after 7 years she knows the drill quite well, drop off my kayak at the launch, drive to registration, get my race number and drive up river to the start line at the Marietta River Park. Just before the start I downed a bottle of water and ate a Clif Bar Clif Shot Energy Gel, so on top of a Banana and a Clif Bar Organic Energy Food I had at home, nutritionally; I was all set.

The start was a little different this year for a couple reasons. Pretzel City Sports does the timing and if you know them, you know Ron Horn. Ron has been at the start each of the previous years adding his own unique touch to pre-race announcements. This year unfortunately he was away working a different event on his schedule, so his color commentary was sadly missed. In all of the past years a woman from the Susquehanna Valley Chamber Of Commerce was the race director and speaker and she was absent as well. Another obvious difference was the small field of participants, with only 77 registrants and that's counting both relay team members.

Nothing else was different though and soon we heard "go" and off we went down river on the Northwest River Trail. It's a multi-purpose paved trail that leads the runners to town where the race swaps the trail for the streets of Marietta.

I'm not a fast runner to begin with and I've spent many of the weeks leading up to this little run trying to regain some sort of fitness level from injuries; so I had no idea what to expect for a pace I could hold onto while I careened toward my kayak. I heard my watch beep for the first mile, but I couldn't bring myself to look to see just how slow I was going. All I knew was that my heart rate felt sustainable so I wasn't going to change anything. If I couldn't sustain it, I'd slow the heck down.


I started at the very back of the pack. I'm used to ultra starts where my positioning at the start line means very little for me and I didn't want to be in the way of those fasties who planned to fly from the gun. With all that said, I did have fun chasing and passing other runners through the first couple of miles. I eventually came up behind three guys who looked my age, in fact I could've sworn I heard  them exchange their ages (and they were in my age group). One guy almost immediately blew up and dropped from our group, but the other two looked like stronger runners than me so I was encouraged that I was hanging with them. I figured if I could stay with them to the kayak, I might survive. Soon my plan dissolved as they both of them started to struggle each at different times. One guy was taking brief walk breaks and the other guy was yoyo-ing up and back, going behind me then ahead of me. That went on for a little while until I found myself permanently in front of them. I wanted to follow their pace and now somehow I was the pacer.


We came through a final turn and I saw Janice taking photos, I also felt my heart rate spiking. I knew I couldn't handle the kayak, much less paddle efficiently arriving with my heart in the red so I walked 4 or 5 strides until it felt under control. In that short break both guys passed me, but that short break was also all I needed and I quickly passed them and with a burst that separated me from them significantly. I never saw them at the kayak transition or again until they finished.

I had registered early so my number was 5 and that meant my kayak was in the front row of boats, closest to the river. In fact I had a straight shot to the boat launch. That's where that advantage seemed to fizzle as there was a bit of a traffic jam at the river's edge. A young woman was taking a long time to get in her kayak and the guy next to her forgot to put his life vest on and it was tangled in his bungees and his paddle. My kayak's 14 feet long and just heavy enough that it's not exactly maneuverable so when I needed to go around these folks to the other side of the ramp, I'm sure it wasn't exactly graceful. Soon enough though I was in the water making a wake and heading down river to Columbia's River Park. The woman who was at the launch was in a kayak like I hadn't seen before and she wore a helmet. She also paddled way out river right when the finish line was on the left. She went so far out, I was concerned she may not have known where the finish line was at all.

Getting in a kayak to paddle after running is an interesting transition. You go from using your legs to using your upper body. If the transition isn't odd enough when you start to fatigue, it doesn't seem to matter which muscle group you're using; you're tired all over. The river was high from recent rains and making the paddling easy as many of the rocks were submerged below. I passed a few folks in the kayak who simply seemed like they were running out of steam. Two guys were clearly there for the fun of it and/or paddling a kayak was not their thing, so passing them was most fun because the fun they were having; laughing and yelling "you go dude". I think that was code for, "you go old man". [Those fellas later approached Janice asking if she had a photo of them leading the race. They said they went out fast in hopes of being captured actually leading at some point, knowing they wouldn't win.]


Soon I was floating across the finish line and again this attempt fell short of my goal to someday finish this thing under an hour (I was bummed about that for almost a second). I quickly realized Janice wasn't there at The Columbia River Park. I had seen her in Marietta, but now that I thought of it I didn't see her at the boat launch. She goes to an overlook to take photos, but it's difficult to see people up there from the river, but she definitely wasn't at the finish. Now all kinds of things were going through my head, keys locked in the Jeep? an accident?...thankfully she eventually showed up and jokingly said I had gone too fast for her to keep up. While I was running with those guys, a volunteer fire person there for traffic control (I think) was driving a pickup truck along side us as we ran. She was driving quite slowly (our running pace) and shadowing us and it was really unnerving. I eventually asked her to go ahead of us or behind us. I'm not sure she heard me as she gave me a bewildered look. She did however drop back behind us. Well, apparently Janice got stuck behind that same truck and was unable to get to the boat launch in time. When leaving the overlook she again got stuck behind slowpokes, but that's a lot better than some crisis that my brain was imagining. 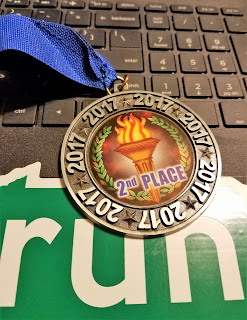 We stayed for the raffle and awards. Again, I didn't win a raffle prize, but I did get a nifty medal for being the 2nd fastest guy in my elderly age group. We took some time to play Pokemon Go and then headed home to enjoy the family reunion...a successful day!